The Structures of Growth Learning Is No Easy Task

Most of us are trying to get better at something. And when we think about our future progress, we tend to imagine we will improve linearly. We’ll work hard at mastering some skill; we’ll steadily get better and better.

But, as the Canadian writer Scott H. Young points out in a recent blog post, progress in most domains is not linear. 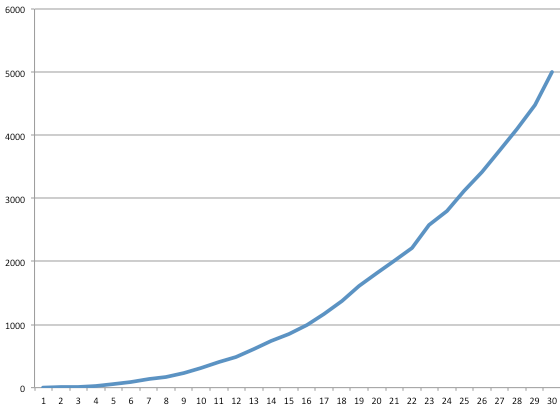 In some spheres, like learning a language or taking up running, improvement is logarithmic. You make a lot of progress when you first begin the activity, but, as you get better, it gets harder and harder to improve.

Logarithmic activities require a certain sort of mind-set, Young writes. During the early high-growth phase, when everything is coming easily, you have to make sure you maintain your disciplined habits, or else you will fall backward.

For example, when Tiger Woods was first competing at golf, he had to stick to his arduous practice routine even though success seemed to come ridiculously easy. But then, when he hit a plateau, he had to reinvent his swing to reach that final tippy-top level.

In other domains, growth is exponential. In these activities, you have to work for weeks or even years at mastering the fundamentals, and you barely see any return. But then, after you have put in your 10,000 hours of effort, suddenly you develop a natural ease and your progress multiplies quickly.

Mastering an academic discipline is an exponential domain. You have to learn the basics over years of graduate school before you internalize the structures of the field and can begin to play creatively with the concepts. Ice hockey is an exponential activity (it takes years just to skate well enough).

Many people quit exponential activities in the early phases.

You’ve got to be bullheaded to work hard while getting no glory. But then when you are in the later fast-progress stage, you’ve got to be open-minded to turn your hard-earned skill into poetry. Vincent van Gogh had to spend years learning the basics of drawing, but then, when he’d achieved mastery, he had to let loose and create art.

Yet other domains follow a valley-shaped curve. You have to go down initially before you can go up.

Thinking about growth structures reminds you that really successful people often have the ability to completely flip their mental dispositions.

In many fields, it pays to be rigid and disciplined at first, but then flexible and playful as you get better. If you go into politics, you have to make the transition from campaigning, which is an instantly gratifying activity, to governing, which is an exponential activity, requiring experience, patience and hard-earned wisdom.

This way of thinking also makes it clear that skill acquisition is a deeply moral activity. You don’t only need knowledge about what to do; you have to train yourself to defeat your natural desires.

Finally, this focus on growth structures takes your eyes off yourself. The crucial thing is not what traits you intrinsically possess. The crucial questions are: What is the structure of your domain? Where are you now on the progress curve? How are you interacting with the structures of the field?

The crucial answers to those questions are not found in the mirror. They are found by seeing yourself from a distance as part of a landscape. That’s a more pleasing and healthier perspective in any case.